This article first appered in Impose Magazine in 2010:

"I had never used a chop-saw, but I sort of knew that I needed one."


In early 2006, when my wife was pregnant with our first son, she experienced an irrepressible nesting instinct. We were living in a rented house in North Adams, Massachusetts, and I was touring heavily with the Books. Molly, being the tenacious woman that she is, set out to find the perfect spot to raise our family. I was on our first European tour, somewhere around Bristol, UK, I think, when I got an email from Molly with this picture attached: 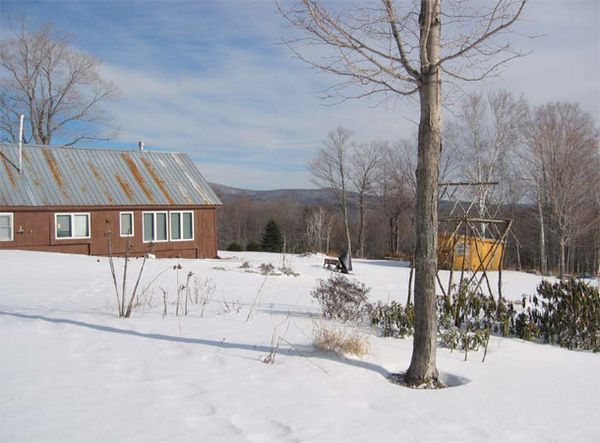 My first impression was that it looked like an uninsulated shack in a giant field of slush. I worried that the pregnancy had affected her judgment. I raised my concerns as gently as possible...

"Don't worry" she said, "I dug through the slush and found good things, the land is good."

"Well, We have a couple of months before the baby comes."

"I better buy a chop-saw as soon as I get home."

I had never used a chop-saw, but I sort of knew that I needed one. Like most young couples we had fantasized about building our dream house from scratch. Leave it to my wife to actually force it upon me. Actually I was psyched, our mortgage payment on sixteen acres of beautiful high meadows (plus a semi-livable shack) was quite a bit less than the rent on Molly's semi-livable studio apartment in Brooklyn. And I love building stuff, at least with legos, which at the time was the extent of my handiness. By the time Sepp arrived, we had added a staircase, skylights, and renovated the attic into a bedroom complete with a claw-foot tub and sink. I have the image of Molly working the chop-saw when she was 8 months pregnant etched into my mind... it's probably part of the reason one of Sepp's first words was 'excavator'. 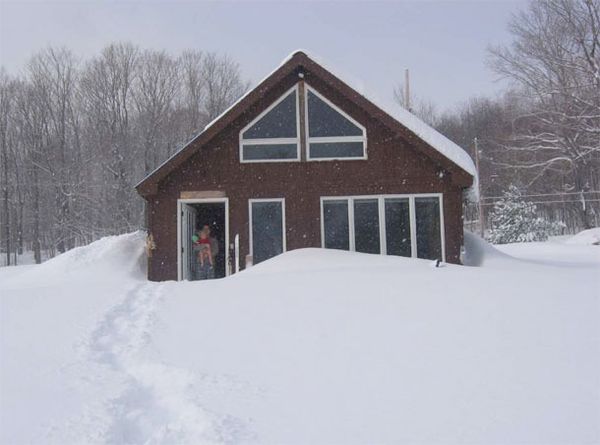 When Molly was pregnant with our second son, it was clear that we needed a lot more space. I started learning about residential construction through the internet and books like Scot Simpson's classic The Complete Book of Framing. The feng shui of the shack was all messed up, so we started thinking of designs that would reorient the house better with respect to the land. It was around then that I discovered Christopher Alexander's “A Pattern Language” which is one of my favorite books. It lists some 250 patterns that compose the elements of a livable design from the smallest scale (doorknobs) to the largest scale (cities). Eventually we settled on a partitioned passive solar design, that would allow us to conserve fuel and give Molly a place to start seeds to extend our growing season. We heat entirely with firewood wood that we harvest from our land, which I store next to my studio, that I built from the shell of an old tractor garage. 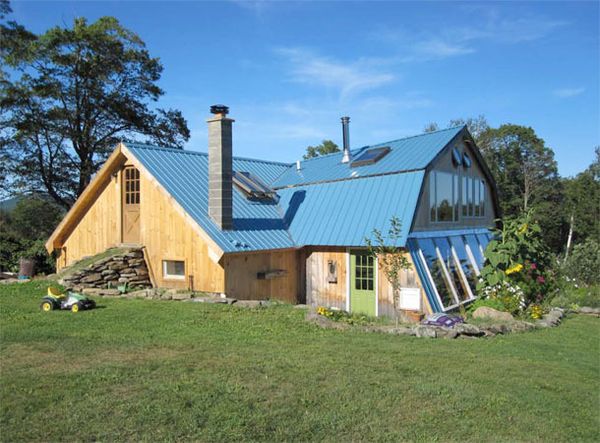 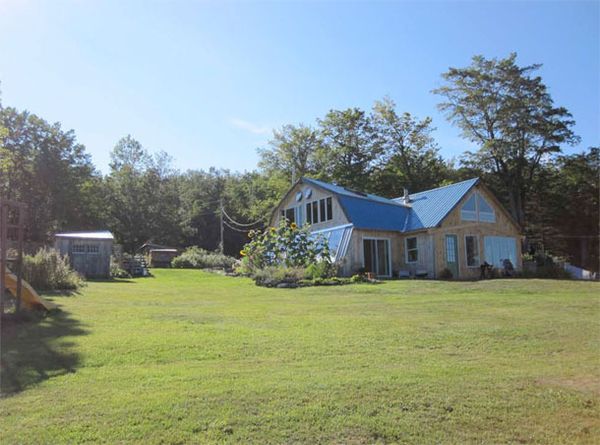 The large greenhouse windows face south, so that the room heats up to around 90° F even during the middle of winter, which keeps the bedroom above it warm through the night. Molly's studio is on the north side with machine/tool storage below. Most of the wood and windows I hauled from a salvage yard in Brattleboro VT called ReNew, and a liquidation sale from a Home Depot that was forced to close after being out-competed by the locally owned hardware store across the street. Even on a musician's salary, we haven't needed to borrow anything for the additions. 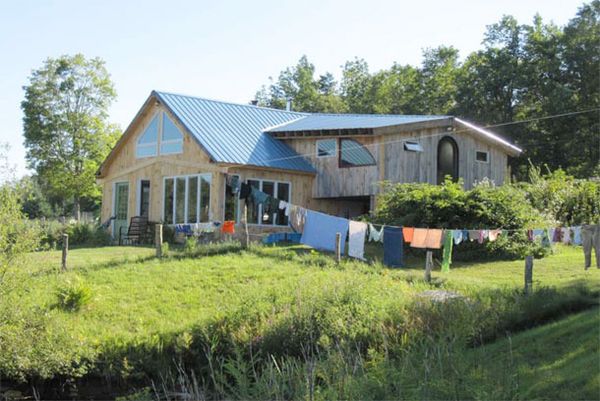 We have a 'No Contractor' rule. If we can't do it ourselves than we don't do it. This keeps things cheap and practical, and extraordinarily satisfying. Our second son, Asa, was actually born at home in the new bedroom. 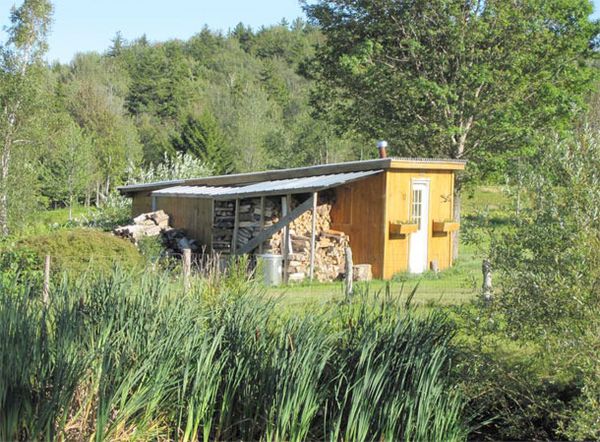 My studio, where The Way Out and Zammuto records were made. Summer 2010.

Molly's instincts have proven to be very sharp. I'm good for the tasks that require stupid brute force, but she's got a green thumb that is almost eerie; today she pulled a 15 pound watermelon out of the garden and we're at 2,000 feet elevation in Vermont. We got 7 gallons of wild blueberries out of the meadow this year, and we've scarcely bought a vegetable since May. My next task is to build a root cellar so that we can store all of the potatoes, beets and carrots that she's about to harvest. 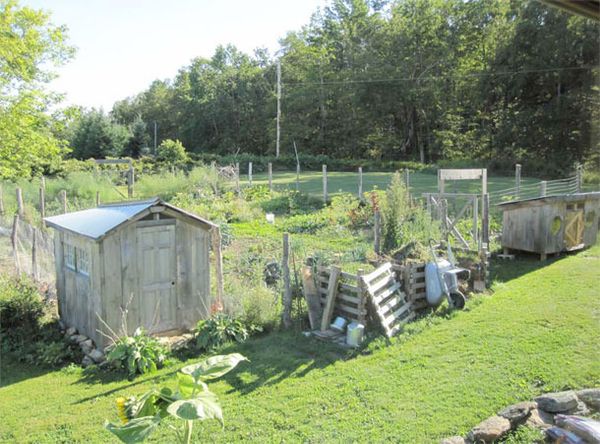 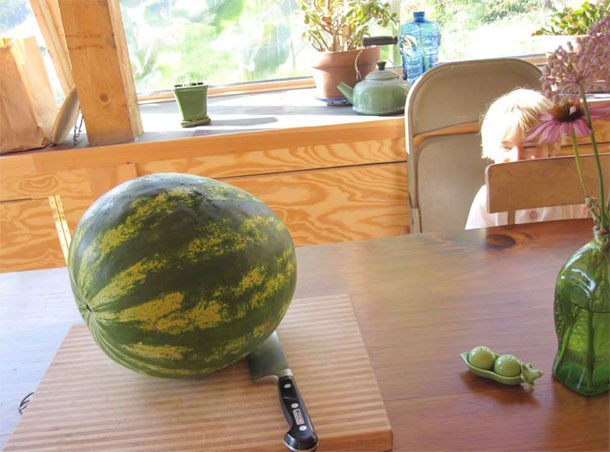 Recently I've been dreaming about building a full production studio on the site of the original farmhouse which burned down several decades ago… Someday. 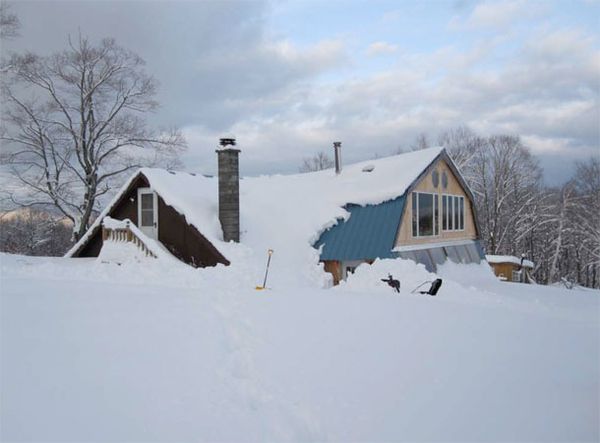