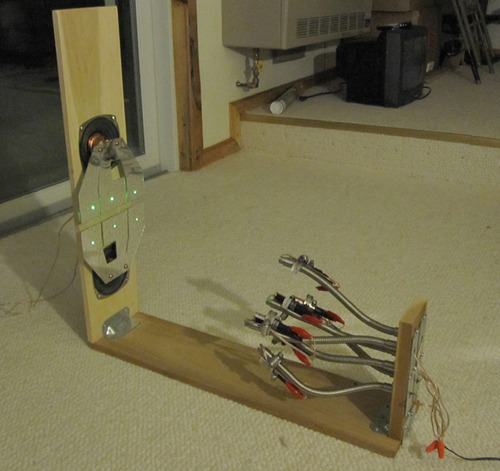 It’s made from poplar and has 6 Green Lasers (532nm) mounted on goosenecks (right) that are focused on 2 carefully cut flexible mirrors, that are, in-turn, attached to miniature subwoofers, powered by a cd player through a small amplifier (not shown). 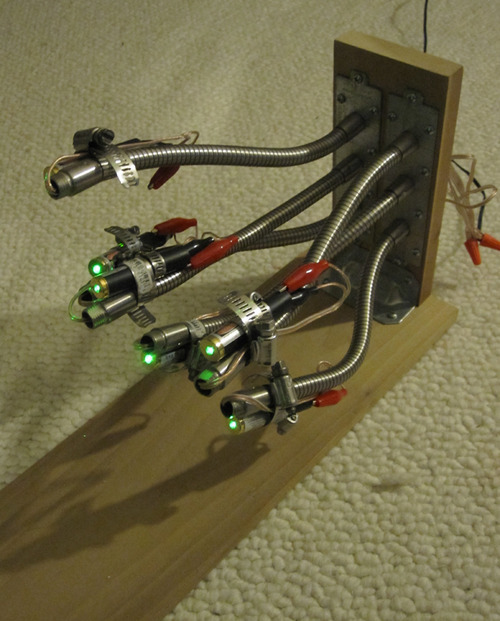 I got the green lasers by cutting them out of laser pointers that I bought from an online wholesaler. I cut off the back part of each laser pointer with a pipe cutter and replaced the batteries with a 3 volt ac/dc wall plug via alligator clips. They are amazingly efficient light sources, tremendously bright and tireless, I’ve run them for weeks at a time with no apparent change to their output! The goosenecks we’re salvaged off of a cheap floor lamp that I bought at the ‘Voldemart’. 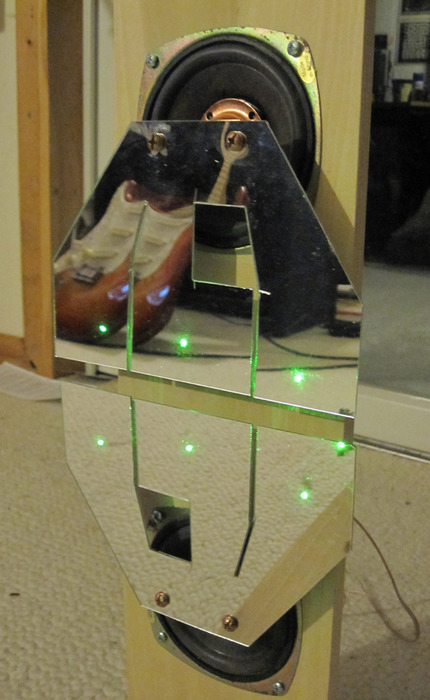 I got the mirrors at an autoparts store as a cuttable sheet designed to replace broken sideviews. The flexibility is important for the projection to work properly… The mirrors are mounted to four inch speakers using copper fittings from the plumbing aisle. (mini subwoofers are best since they offer maximum displacement). Sounds are played through the speakers causing them to vibrate and the lasers are redirected by the vibration of the mirrors and projected against the wall to create some astonishingly beautiful patterns (via persistence of vision):

Simple sine waves produce lines/circles/ovals/eights. Combinations of sine waves produce more complicated gyroscopic effects, that often oscillate in bizarre ways if the higher frequency is near an overtone of the root frequency. Careful tuning and detuning of related frequencies gives you quite a bit of control over what the pictures do. More complicate acoustic noises (eg guitar or voice) give pretty chaotic noisy looking tangles. In this case, it’s in stereo, so more combinations are possible.

The odd shape of the mirrors ensures that no two frequencies will have exactly the same effect since the standing waves are contained in a fairly chaotic (non-resonant) space. The displacement in the x and y axis for any given frequency is unpredictable, but completely repeatable. So by sending a frequency sweep through the system you can quickly get an idea of where the interesting images lie and save them for use in a composition.  I'm working on a version that is interactively controlled by a multitouch ipad app with frequency on one axis and volume (or perhaps waveform) on the other.